Kanye ripped Wiz Khalifa to SHREADS on twitter after Wiz criticized Ye changing the name of his album to Waves.

Ye went into Wiz, his music, Amber, AND their son.

So AMBER, as expected…clapped back–> She said KANYE was just mad she wasn’t there anymore to stick a finger in his booty! EEK.
Kanye West FINALLY addressed it..
He took to Twitter to clarify that he DOES NOT play with that area at all. 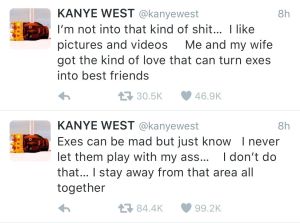 Do you think Amber Rose made it up because he dissed her and her son!?
Or is he just going to DENY DENY DENYYYYYY!!!!!!!!