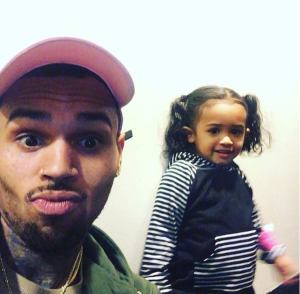 Is Chris Brown making his daughter SICK!??!
His baby mama Nia Guzman says so. She is claiming that 1 year old Royalty has developed ASTHMA because Chris has exposed her to secondhand smoke.
As we know, he loves weed & apparently tobacco too.
Nia says when Royalty comes back from a visit with daddy, she stinks of weed.
She wants to restrict his visitation–asking for the judge to make him get a full time nanny, and prohibit Chris from doing drugs or drinking around their daughter.
Of course, she wants her $2500 a month upped too…to $16K!!!
I mean…the no drugs or drinking around the daughter make sense, no?