He blasted music producer Bob Ezrin for giving his album “The Life of Pablo” a not-so-great review.
AND he went in JUST A LITTLE on Taylor Swift too…insinuating she didn’t deserve TWO best album awards. 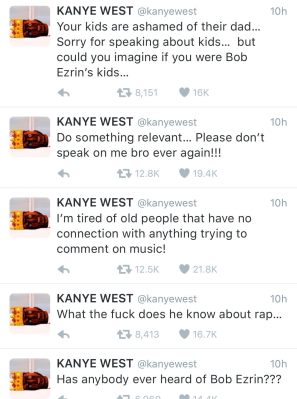 Us Weekly is reporting that Kim Kardashian West is demanding that Kanye get THERAPY!
“Kim is very concerned and frustrated. She and Kanye are having big problems that are escalating. Kim has demanded that Kanye get therapy.”
He hasn’t agreed to it yet! He really seems like he’s LOSING it, no?