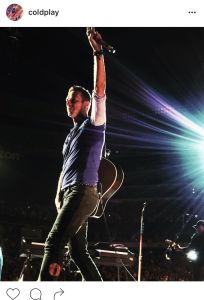 AWESOME!!! Coldplay’s Chris Martin is teaming up with The Chainsmokers for new music.
Alex & Andrew (the DJ Duo) teased it on social media–check out the video of them working on it here: http://bit.ly/2cYD9oJ
You KNOW that’s going to be good.