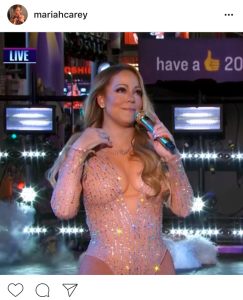 Well, this is just sad.
Poor Mariah Carey!!!!!
Her star on the Hollywood Walk of Fame has been vandalized.
Someone drew a question mark at the end of her name with an ink marker—
TMZ is reporting that as of this morning, it was FIXED–and that removing the ink cost $1500.
Vandalism is a FELONY and they’re looking for the guilty party!
Crazy. Poor Mimi. People will NEVER forget her NYE performance blunder.