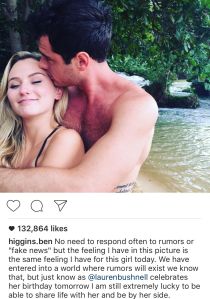 Ben Higgins wants you to know he is NOT a Bachelor again!

Rumors have been going around that Lauren Bushnell and Ben BROKE UP!

He went to Instagram to clear it up!
Saying:
“No need to respond often to rumors or “fake news” but the feeling I have in this picture is the same feeling I have for this girl today. “

Still going strong 🙂
Not many couples from The Bachelor survive…I hope they do!