WOW!!! This year is the 15th Anniversary of a Walk to Remember!

That was my FAVORITE movie when it came out, I absolutely loved Mandy Moore & Shane West together in that.
And I cried…lots and lots of tears. 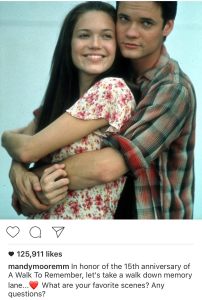 So, it turns out they’ve been thinking about a REUNION—obviously, if you’ve seen the movie–we can’t really get a PART TWO sans Mandy.
BUT, Mandy said via twitter than she an the rest of the cast have been working on getting a reunion together.

I would be just as happy to get another movie with the same cast!!!!!
Let’s see if she has TIME to do it, since she’s kicking major butt on the NBC hit TV show “This Is Us”

Just for fun, why don’t we watch my favorite scene from the movie: